From the fields to the boardroom, migrant students learn what it takes to land high-paying jobs 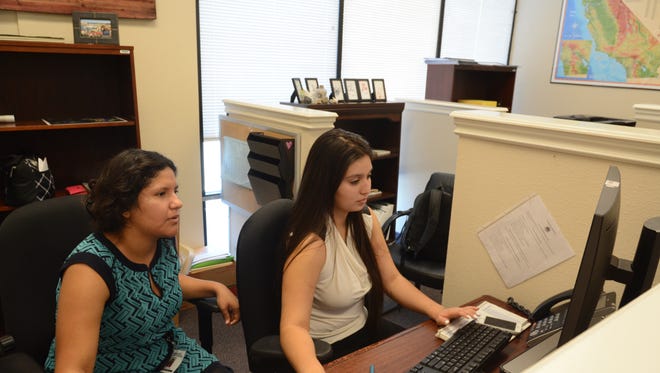 Migrant students learn what it takes to land high- paying jobs. The Riverside County Office of Education placed 18 migrant students in internships around the Coachella Valley, Giving them professional work experience they would otherwise not have.The summer after eighth grade Juan Meza joined his parents in the fields picking grapes. He got up at 4 a.m. to pack his lunch and went to work for eight to 10 hours a day. Sometimes there was no shade to sit under when he took a break to eat.

“I wasn’t doing very well in school,” Meza said. “Nobody in my family has gone to college, so my mom wanted to take me to see what I would be doing.”

Meza, now a junior at Indio High School, was failing most of his classes, but the back-breaking labor made him long for the school year to start again. He pulled his grades up, managing to get As and Bs last semester. And this summer – instead of joining his parents in the field – Meza is interning at Chandi Group USA as part of a new internship program for migrant students started by the Riverside County Office of Education.

Migrant students are children of farm workers. Their parents pick produce, oftentimes traveling across the country to follow the harvest. The travel can disrupt the school year for some of the students, and many families struggle financially. Meza, who lives with an uncle, only gets to see his parents a few times a year. They live in Mexico and come to the U.S. to work.

“All of our interns do not have any experience outside of agriculture. That’s what most of them have done since they were very young,” said Armando Valles, coordinator for the internship program. “Our goal is to give them some exposure, some life experience and most importantly something to fill out their resume.”

In its inaugural summer, the county placed 18 migrant students at work sites across the Coachella Valley, including Borrego Health, Beaman Law, Rep. Raul Ruiz’ district office, the cities of Coachella and Indio and others. Valles also holds classes on Fridays to teach the interns interview skills, money management, resume writing and leadership.

The opportunity is pivotal for these young students, Valles said, because almost all of them are the first in their families planning to start professional careers. They don’t have siblings or parents who can help them through the college application process or who have ever held an office job.

“They have to figure it out and make it happen for themselves,” Valles said.

Meza said he wants to be an example for his younger brother, Angel, who is in fourth grade. Before starting the internship program, Meza wasn’t sure about attending college and thought the best he could do was become a mechanic. But the internship has taken him to construction sites and to county planning meetings. Now, he has goals of becoming a planning commissioner or project manager for Chandi Group.

The internship can, however, be difficult for students. Many of them don’t have reliable transportation, and although the county pays them for the hours worked, they could make more money as summer laborers. But Michelle Chavez, a senior at Desert Mirage High School, said the sacrifice is worth it.

Chavez wakes up at 4:30 each morning to get to her bus stop in Thermal by 5 a.m. She spends half a day at the Riverside County education office in Indio and half a day at Assemblymember Eduardo Garcia’s district office. Most days she doesn’t return home until after 6 p.m.

“I improved my computer skills. My parents never had technology for me to use. I also got an insight into what it’s like to work in an office and to be an independent worker,” Chavez said.

Without this experience, she would be helping her parents tend to date trees or at home cooking for the family. But Chavez has lofty goals. She wants to be a doctor and come back to the east valley to improve access to healthcare.

“There are so many resources that are needed. It’s a long term goal, but I think it’s important for the valley,” she said.

The county plans on expanding the program next summer. RCOE serves about 3,800 migrant students, with a majority of them coming from the eastern Coachella Valley.